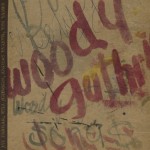 While Bruce Springsteen tries to turn himself into Woody Guthrie by writing socially conscious lyrics (that are nebulous at best) and adopting a faux Oklahoma accent, the spirit and songs of Woody are alive and well in the form of New Multitudes. Marrying new music to lyrics left behind by Woody Guthrie is not a new idea, and Woody certainly left behind some great unrecorded lyrics. It had been done before to great effect by Billy Bragg and Wilco on their two essential “Mermaid Avenue” records. Timed to celebrate Woody’s 100th birthday, comes “New Multitudes” featuring Jay Farrar (Son Volt, Uncle Tupelo), Will Johnson (Monsters Of Folk, Centro-Matic), Anders Parker (Gob Iron, Space Needle) and Yim Yames (My Morning Jacket). The album is sonically reminiscent of classic Crosby, Stills, Nash & Young and Fleet Foxes, and is certainly the best folk album released this year. It’s also a solid follow-up in the tradition of the “Mermaid Avenue” records and a deserving tribute to one of America’s greatest songwriters. The twelve track album is available in a deluxe version that adds on a second disc with eleven more songs.