You are here: Home / Music / Alternative / Song Of The Day by Eric Berman – “Memories Can’t Wait” by Talking Heads 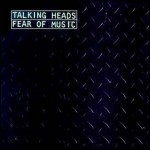 Former art school students have a funny way of expressing themselves. Like naming an album “Fear Of Music” and including a song like this one that conjures deep seated feelings of dread and ill will. But it doesn’t end there…Byrne numbly mumbles throughout this record asking himself  questions like “What is happening to my skin? Where is that protection that I needed?” in another song. “This ain’t no party…this ain’t no disco…this ain’t no fooling around” is another rally cry that adds to the grim picture on Talking Heads’ third aptly titled 1979 platter. It’s a record where “Heaven is a place, a place where nothing ever happens”…albeit, the Heaven in question here is not a final resting place, but a club. Producer, Brian Eno was once again invited to this party and the growth between this album and the one that came before it felt on all levels. The Heads’ palate expanded to include African rhythms and straight-ahead funk and disco. While this was the last album to be created by the core quartet, the song “I Zimbra” pointed towards the future with an expanded lineup that featured numerous percussionists and Robert Fripp on guitar. In other places we’re treated to songs with titles like “Drugs,” “Mind,” “Paper” and “Electric Guitar.” Oh and there were hits too…”Life During Wartime” and “Cities” that filled dance floors around the world.