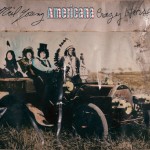 This ain’t your daddy’s doo wop…nor is it your sister’s “American Recordings” by Johnny Cash. What we have here are four crusty guys digging up some crusty old tunes and playing them the only crusty way they know how to. Nothin’ fancy…one take and done. You can practically feel the camaraderie and familiarity these guys have with each other in every note. This Neil Young sounds awful on paper. When I first heard about the premise of him doing old Americana songs recast for Crazy Horse, I though it was gonna be awful…and on some of the tunes here, I was completely right. But the record does have its charms, and it certainly has lots of crunch. On this track, Neil and the Horse ride back into Neil & The Shocking Pinks territory with a cover of The Silhouettes’ doo-wop classic, only this version is rickety, a bit clumsy and totally charming. Some of the tracks work really well…”Clementine,” “Gallows Pole,” “High Flyin’ Bird,” “Travel On” and “Jesus’ Chariot”…while others are completely dreadful…”Oh Susannah,” “Tom Dula,” “This Land Is Your Land,” “Wayfarin’ Stranger” and “God Save The Queen.” Note to Neil: Everything you do isn’t pure genius. Just because the tape is rollin’, doesn’t mean you have to release it. This record would have made a great EP. So, does it pass my Neil test, meaning will I play this album a few months from now? Probably not…there’s only one Young record released in the last decade that I go back to and that’s “Prairie Wind.” Neil needs an editor…but in the meantime, keep on rockin’ and releasin’ the tunes. It gives me something to write about.