You are here: Home / Music / Song Of The Day by Eric Berman – “Plateau” by Meat Puppets 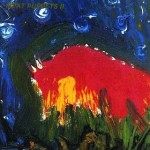 Psychedelic desert post-punk rock from one of the best bands on the influential SST record label. Brothers Curt Kirkwood (guitar/vocals), Cris Kirkwood (bass) and Derrick Bostrom hailed from Arizona and burst onto the scene in the early ’80s as a hardcore punk band. Indeed their first record was loaded with fast tempos, pounding drums and indecipherable vocals. They then began to slow it down adding psychedelic and country elements to the mix and hit upon a signature sound that was wholly their own featuring the searing guitar playing of Curt. In concert they used to throw in covers by the likes of Marty Robbins and Johnny Cash just to mix it up. We all know that a certain Kurt Cobain was a big fan inviting the band to perform this song with Nirvana on their MTV Unplugged show. Drug problems led to the breakup of the band in 2002 culminating in Cris being shot in the stomach twice during a melee in Phoenix, AZ that landed him in jail. He has since cleaned up enough for the brothers to reform with different drummers, record and tour again.