You are here: Home / Music / Folk / Song Of The Day by Eric Berman – “The Whistling Gypsy Rover” by The Clancy Brothers & Tommy Makem 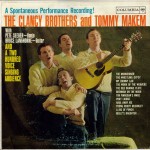 Patrick “Paddy”, Tommy, Bobby and Liam were the Clancy Brothers and together with Tommy Makem they recorded dozens of records and were responsible for not only introducing America to traditional Irish Folk music, but helping to popularize Folk music all over college campuses throughout the late 1950s and early 1960s. They were a major influence on Bob Dylan who nicked the melody of The Clancy Brothers’ recording of the song “The Patriot Game” and appropriated it for his own song “With God On Our Side.” The Brothers’ big break came on “The Ed Sullivan Show” in 1961 when Pearl Bailey was a no show and the boys were given her spot giving them an unprecedented 16 minutes of air time in front of an audience of 80 million people.  Although they had been recording for the Tradition Record label since the mid-50s, they were signed by John Hammond at Columbia Records shortly after this performance and it was the connections of their label mentor John Hammond that cemented their success.  This performance was from a 1962 PBS special filmed in Chicago.