You are here: Home / Music / Song Of The Day by Eric Berman – “Somebody Loves You” by The Delfonics 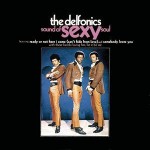 Before there was TSOP (The Sound Of Philadelphia) there was Philly Groove and the deep soul sound of The Delfonics featuring the songwriting of legendary producer Thom Bell and the group’s lead singer William Hart. The Delfonics classic blend of Hart’s soulful falsetto floating above a bed of gossamer harmonies courtesy of Wilbert Hart and Randy Caine sent songs like “Ready Or Not Here I Come (Can’t Hide From Love),” “La La (Means I Love You)” and “Didn’t I (Blow Your Mind This Time)” up the pop and soul charts during the late ’60s and early ’70s. Their songs have been covered by the likes of Todd Rundgren, Prince, Aretha Franklin and The Jackson Five and sampled by The Notorious B.I.G., Wu-Tang Clan and DJ Jazzy Jeff and the Fresh Prince. This song was the B-side to the “Ready Or Not” single and was originally on their 1969 album “Sound Of Sexy Soul.”