You are here: Home / Music / British Invasion / Song Of The Day by Eric Berman – “The Best Way To Travel” by The Moody Blues 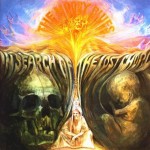 Like most of America, I discovered The Moody Blues five years after they recorded their biggest hit, “Nights In White Satin,” which became a belated smash on these shores in 1972. At the time, there was a plethora of Moody Blues recordings that had been out for a few years to discover, and I started with the follow-up album to “Days Of Future Passed,” their 1968 release “In Search Of The Lost Chord.” When the group hit the studio in 1968, they made a conscientious effort to play as many instruments themselves and not rely on the orchestral backing that pervaded their last release. The band members taught themselves to play oboe, sitar and tablas in just a few hours while in the studio, before committing their new songs to plastic. The result was a psychedelicatessen of music designed to feed your head, including this Mike Pinder song that proclaims that “thinking is the best way to travel.” Sure, the record has dated some over the years…and sure, I’m sometimes a little embarrassed to cop to listening to the group’s brand of psychedelia, but in my estimation, they got it completely right with this song from the best and most consistent record they ever released.