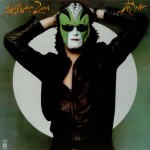 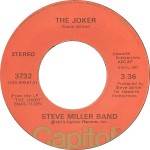 By the time of their “The Joker” single, The Steve Miller Band were five years and seven albums into a career that spawned only four chart singles, the highest being “Living In The U.S.A.” which charted at a paltry #49 when reissued in 1972. (It only reached #94 when originally issued as a single in 1968.) Something had to change, or The Steve Miller Band would find themselves without a recording contract.

Salvation came in the form of the group’s 1973 album The Joker, where they abandoned their psychedelic blues-based ways for a more concise, radio-ready approach, resulting in the title track and today’s Song Of The Day topping the charts, with the album climbing to the #2 position on its heels.

The band consisted of Steve Miller on guitar and vocals, Gerald Johnson on bass, Dick Thompson on keyboards and John King on drums, with Lonnie Turner (bass) and “Sneaky” Pete Kleinow (pedal steel) making guest appearances on various tracks. It was Miller who gave the song its biggest hook with his screaming whistle-like guitar figure that repeats throughout the song.

Miller described his inspiration for “The Joker” to British magazine Mojo in 2012: “I got this funny, lazy, sexy little tune, but it didn’t come together until a party in Novato, north of San Francisco. I sat on the hood of a car under the stars with an acoustic guitar making up lyrics and ‘I’m a joker, I’m a smoker, ‘I’m a midnight toker’ came out. My chorus! The ‘some people call me the space cowboy’ and ‘the gangster of love’ referred to earlier songs of mine and so did ‘Maurice’ and ‘the propitious of love.’ You don’t have to use words. It was just a goof.”

The lyric “Some people call me the space cowboy” came from the 1969 song “Space Cowboy” originally on the Brave New World album, “Some call me the gangster of love” refers to the track “Gangster Of Love” on the Sailor album, and several references were derived from the song “Enter Maurice” on the group’s 1972 album Recall The Beginning…A Journey From Eden. That song contained the name Maurice, the name of the central character in “The Joker,” and the phrase “pompitous of love” got its first airing there as well.

The song’s famous use of the word “pompitous” also has interesting origins. “Pompitous” is actually a real word as defined by The Oxford English Dictionary as “to act with pomp and splendor.” However, when Miller used the word in the line “Cause I speak of the pompitous of love,” he misheard it from the 1954 Medallions’ single “The Letter,” where it appears in the following line: “Let me whisper sweet words of dismortality, and discuss the “puppetutes” of love.” Vernon Green, who wrote “The Letter,” defined his made-up word “puppetutes” as “A secret paper-doll fantasy figure who would be my everything and bear my children.” (Song Facts)

The song also borrows the line “You’re the cutest thing I ever did see / I really love your peaches wanna shake your tree / Lovey dovey, lovey dovey all the time” from The Clovers’ 1954 #2 hit “Lovey Dovey” which was written by former Atlantic label chief Ahmet Ertegun. Ertegun later successfully sued Miller for plagiarism. Miller: “To me, it was an old blues double entendre, but I had to give him credit. I don’t mind having Ahmet’s name beside mine though.” (Song Facts)

While today’s Jukebox Classic topped the US charts in 1974, it didn’t chart until 1990 in the UK when it topped their charts after it soundtracked a Levi’s Jeans TV commercial. The flip of today’s jukebox classic is “Something To Believe In” which was an album cut from The Joker.