You are here: Home / Music / Easy Listening/Pop / Song Of The Day by Eric Berman – “The Windmills Of Your Mind” by Noel Harrison 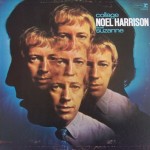 He was perhaps best known for his acting role as Mark Slate in the TV series, “The Girl From U.N.C.L.E.,” but Noel Harrison had a fruitful recording career in the 1960s culminating in three long out-of-print albums for Reprise Records. This 1968 Academy Award winning song was composed by Michel Legrand (music) and Alan & Marilyn Bergman (lyrics) for the film “Thomas Crown Affair” starring Steve McQueen and Faye Dunaway. Legrand adapted Mozart’s “Sinfonia Concertante for Violin, Viola and Orchestra” for the opening melody. Harrison’s also graced the pop charts with his covers of Leonard Cohen’s “Suzanne” and Charles Aznavour’s “A Young Girl.”