You are here: Home / Music / Classic Rock / Song Of The Day by Eric Berman – “Thing Called Love” by John Hiatt and the Goners 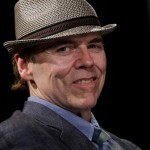 I received an unplanned invite to see a double bill of Steve Earle and John Hiatt at the Ravinia Festival in Highland Park, Illinois the other night. I have seen both artists quite a few times before, but it had been at least 6 years since I last saw Earle and probably 15 years since I’ve seen Hiatt, so I readily accepted the invitation and was treated to a terrific show by two great songwriters and performers. Earle did an hour set that included his classics “Galway Girl,” “Copperhead Road,” “Guitar Town,” “The Revolution Starts Now” and selections from his latest album including set opener “Waiting On The Sky,” “Molly-O” and “My Old Friend The Blues.” Earle led a solid combo that included long-time bass player Kelly Looney, Will Rigby on drums, Chris Masterson on guitar and Eleanor Whitmore on fiddle and keyboards. Although Earle has been touring over the last few years with is wife Alison Moorer, she was not part of the band on this date. John Hiatt also played an hour set that included fan favorites “Slow Turning,” “Tennessee Plates,” “Drive South,” “Real Fine Love” and this song which was the highlight of the set. Hiatt went on to tell the crowd that he would be presenting a Lifetime Achievement Award from the Americana Music Association next month, to Bonnie Raitt who had a big hit with this song. Hiatt also debuted new songs “The Blues Can’t Even Find Me” and “It All Comes Back Someday” from his upcoming September release “Mystic Pinball.” For the first encore, Hiatt was joined by Steve Earle for a duet on Woody Guthrie’s “I Ain’t Got No Home,” then Earle left the stage and Hiatt and the Goners brought it all home with “Riding With The King” and “Have A Little Faith In Me.”