You are here: Home / Music / Jazz / Song Of The Day by Eric Berman – “Ode To Charlie Parker” by Eric Dolphy 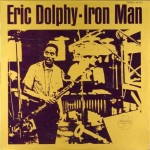 Leave it to Eric Dolphy to record this Jaki Bayard tribute to Bird and not play a lick of saxophone on it. I believe that’s Dolphy soaring effortlessly on the flute here, although the “Iron Man” record credits Prince Lasha on flute. I say that because the soloing here sounds unmistakably like Dolphy and there is also an earlier recording of this track from the “Far Cry” album where Dolphy is credited on flute sounding very similar. This version was recorded in 1963 and was originally released on the “Iron Man” album featuring Woody Shaw Jr. on trumpet, Bobby Hutcherson on vibes, Huey Simmons on alto sax, J.C. Moses on drums, Clifford Jordon on soprano sax and Eddie Kahn on bass. The earlier version, recorded in 1960 (which I could not find to post), featured the all-star lineup of composer Jaki Bayard on piano, Booker Little on trumpet, Ron Carter on bass and Roy Haynes on drums. Any opportunity to hear Dolphy fly on the flute is a welcome opportunity in my book!