You are here: Home / Music / Big Band / Disco / Song Of The Day by Eric Berman – “You’ll Never Find Another Love Like Mine” by Lou Rawls 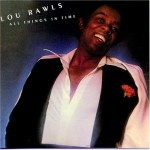 Records don’t come any smoother than this one! Frank Sinatra once said that Lou Rawls had “the classiest singing and silkiest chops in the singing game” and you can certainly hear why in the grooves of this late 1970s Philly Soul million selling hit. Rawls’ career began in the 1950s singing Gospel in groups that also included his friend Sam Cooke. He sang background vocals on numerous records including Cooke’s “Bring It On Home To Me.” In the 1960s Rawls recorded a whole slew of popular albums on the Capitol label and scored with a string of Chicago jazz hits including “Stormy Monday,” “Love Is A Hurting Thing,” “Tobacco Road” and “Dead End Street.” The early 1970s saw Rawls win a Grammy Award for his MGM hit “Natural Man.” But it wasn’t until the late 1970s that Rawls underwent a career renaissance resulting in his biggest hits on the Philadelphia International record label under the tutelage of writers and producers Kenny Gamble and Leon Huff. While some might dismiss this record as a kitschy pure cabaret concoction, Gamble and Huff created a smooth and soulful masterpiece featuring silky strings and an infectious disco bed for Rawls’ vocals to lie down in.