You are here: Home / Music / Blues / Song Of The Day – “On The Road To Freedom” by Alvin Lee and Mylon LeFevre 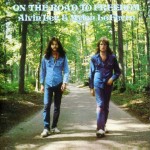 British born Alvin Lee got his start playing the same Hamburg, Germany club circuit as The Beatles where they both performed at the Star-Club in 1962. He found success after forming Ten Years After in 1968 and coming to the attention of rock impresario Bill Graham who brought him to American and booked him into the San Francisco club circuit. But it was the inclusion of his Woodstock performance of “I’m Coming Home” that was included in the film that really established him on this side of the pond. By 1972, Lee left Ten Years After and joined forces with Mylon LeFevre. American-born LeFevre is a leading light in the world of Gospel music, where he composed the song “Without Him” that Elvis Presley recorded on his classic “How Great Thou Art” album. He was also a member of the world-renowned Gospel group The Stamps from 1966 through 1968. Together they cut the album “On The Road To Freedom “ in 1973, with an assist from the elite of ‘60s rock including Steve Winwood, Jim Capaldi and Rebop of Traffic, Ron Wood, Mick Fleetwood and “Hari Georgeson” (aka George Harrison) as he was credited on this record. It was a one-off record that should have led to others based on the quality of material and performance, but it wasn’t meant to be.