You are here: Home / Music / Big Band / Song Of The Day – “The Dipsy Doodle” by Chick Webb & His Orchestra featuring Ella Fitzgerald 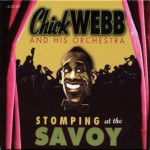 Chick Webb was known as “The King of the Savoy” where he and his orchestra would regularly win battles of music against the other leading big bands of the day. He stood tall amongst big band drummers even though his diminutive frame was only a tad over 4 feet tall. His major discovery was Ella Fitzgerald whose jive vocals light up this gem from 1937.

This stuff is hipper than the latest offerings from Daft Punk and Kanye West!