You are here: Home / Music / Big Band / Song Of The Day – “They Can’t Take That Away From Me” by Billie Holiday 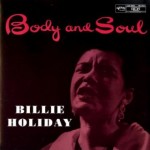 You can tell a lot about people by the records they own. A relative of a friend dropped some records off at my house this weekend for me to look at. While most had condition issues and were hardly worth selling on eBay, the guy did have some interesting and really good records which he graciously told me to keep anyway.

There were jazz records from the 1950s, at least a dozen Sinatra albums, a fair share f classical recordings including several by Russian composer Shostakovich, some requisite Broadway cast albums, and, of course, a copy of Herb Alpert’s Whipped Cream & Other Delights. (Another one for the collection!) All in all, the guy had sophisticated taste in music.

God, I love those deep groove (micro-groove) records from the 1950s! Back then, records were thicker and had deeper grooves which masked the sound of the scratches. Many of the records that I looked at this weekend are visually damaged, many with scratches that you can feel when you run your finger over the surface of the record. As a record collector, that is always a sign of trouble upon playback. But many of the records from the first batch I played sounded pretty good.

One of the records was the Verve Clef Series Hi-Fi album Body And Soul by Billie Holiday. This eight track album was recorded over four days in January 1957 with sympathetic backup by the great Ben Webster on tenor saxophone, Harry “Sweets” Edison on trumpet, Barney Kessel on the very tasty guitar parts, Jimmy Rowles on piano and Alvin Stoller playing drums on half the tracks, with Larry Bunker on the rest. For an artist that is so identified with pain, heartbreak and sorrow, Holiday sounds downright lighthearted here with her lilting voice sinuously slurring the melody.

Another highlight is another one from the Verve Clef Seri es credited to Charlie Parker and His Orchestra called Swedish Schnapps. In spite of the credit, the 1951 album is not an orchestral record at all, rather it features Parker backed by two different small groups from 1949 and 1951.

Some of the other interesting records in the lot were a record on the Cook label called Burlesque Uncensored, a private pressing of a left-wing radio show from the 1950s called The Investigator, and Music For Losers by Dixieland jazz trombone player Turk Murphy.