You are here: Home / SportsAudio.net Archives 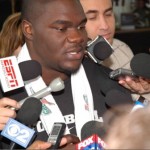 Since our inception in 1993, SRN has covered a number of major sports events and milestones. Here we present some of the best audio we have acquired covering some of the biggest names in sports.

Back in our early days, we, like everyone else, recorded interviews on analog tape. Recently, we have combed our audio vault and have been restoring audio from interviews and press conferences, by converting it to digital form.

SRN Broadcasting has a treasure trove of old audio from some of the biggest sporting events of the past two decades including the Super Bowl, NBA Finals, World Series, Stanley Cup, NCAA Final Four, PGA, and more.

This includes interviews from some of the biggest names in sports such as Michael Jordan, Kobe Bryant, Bret Favre, Tiger Woods, and others.

We present to you our growing collection of sports audio archives.

These are available free, for private, non-commercial use. Anything else requires our permission, a note from your mother, or a carefully crafted essay explaining why….