You are here: Home / Archives for 2015 BMW Championship 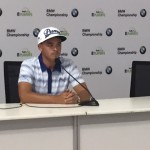 Baseball has its playoffs approaching, NASCAR has the Sprint Cup Series, and golf, not to be outdone, has the FedEx Cup Championship. This series of events has the top 125 tour players vying for a $67 million in prize and bonus money to crown a tour champion. The playoffs feature a progressive cut, beginning with The Barclays in the New York/New Jersey, continuing with the … END_OF_DOCUMENT_TOKEN_TO_BE_REPLACED