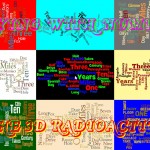 We are going digital in a different way this time on The Award Winning 3D RadioActivity... As you know, a number is a mathematical object used to count, label, and measure. The definition has been extended over the years to include  zero, negative numbers, rational, irrational, Prime and complex numbers to infinity and beyond.  Some traditionally have alternative words to … END_OF_DOCUMENT_TOKEN_TO_BE_REPLACED