You are here: Home / Archives for Aaron Rogers

with Packer Dave, Steve Leventhal, and John Poulter This week our special guest, Dionne Miller of ABC 7 Chicago, discusses the Chicago Bears at mid season, and previews the upcoming game against the Detroit Lions. Dave looks ahead to the Green Bay Packers - Miami Dolphins game at Lambeau, and John comments on the unexpected firing of Chicago Blackhawks coach Joel Quenneville.  … END_OF_DOCUMENT_TOKEN_TO_BE_REPLACED 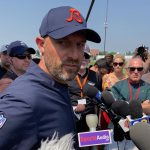 with Packer Dave, Steve Leventhal, and John Poulter Join us on the Sports Report as Andy Dorf along with our special guest Patrick Finley of the Chicago Sun Times, discuss the Chicago Bears - Green Bay Packers season opening game. Aaron Rogers' amazing comeback was one of several headlines on the first weekend of the 2018 NFL season. As was the arrival of former Defensive … END_OF_DOCUMENT_TOKEN_TO_BE_REPLACED

on the Weekend Sports Report with Packer Dave and Steve Leventhal This is one of the busiest times in sports with the 2017 MLB Playoffs, the start of hockey season, plus NFL and college football in full swing.  We preview it all with our own John Poulter, Jeff Rich and DFS expert Mike Perlow. Mitch Trubisky will be making his pro debut on Monday Night Football, and the … END_OF_DOCUMENT_TOKEN_TO_BE_REPLACED

with Packer Dave and Steve Leventhal It's a short week for the Chicago Bears and Green Bay Packers as they get ready to meet for the first time this season. Nonetheless, we put together a preview for you with Les Grobstein of The Score 670 in Chicago.  We also feature an interview with Jeff Joniak, Bears play by play broadcaster.  John Poulter joins us with a last look at the … END_OF_DOCUMENT_TOKEN_TO_BE_REPLACED 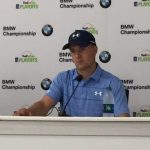 with Packer Dave and Steve Leventhal We'll talk with sports anchor Dave Kerner from WBBM 780 and 105.9 FM in Chicago, who's at this weekend's BMW Championship at Conway Farms in nearby Lake Forest.  Kerner gives us his take on the 2017 Chicago Bears.  Also on the program are John Poulter with an update on the baseball pennant races and our weekly fantasy football segment with … END_OF_DOCUMENT_TOKEN_TO_BE_REPLACED