You are here: Home / Archives for Adam SIlver 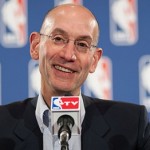 The retirement of longtime NBA Commissioner David Stern became official Saturday. The new leader of the league is Adam Silver, a man who had served as deputy commissioner since 2006.  Silver inherits a league that is in a much better state than when Stern assumed the role in 1984. In Stern's 30 years as head of the NBA, he grew the popularity and value of the league … END_OF_DOCUMENT_TOKEN_TO_BE_REPLACED