You are here: Home / Archives for Altered Five Blues Band ~ Charmed And Dangerous 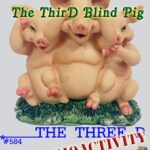 Uncle Marty here, this is The 3D RadioActivity number 584, as we wrap up our look at some of the classic standards and hits from an independent record label, mainly focusing on the blues. It was formed in Ann Arbor, Michigan, by the owner of the Blind Pig Cafe, Jerry Del Giudice, and his friend Edward Chmelewski nearly 45 years ago and now has half a hundred names on their … END_OF_DOCUMENT_TOKEN_TO_BE_REPLACED