You are here: Home / Archives for Argo 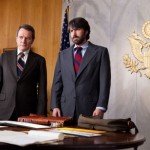 Simply put, "Argo" is one of the best movies of the year and will definitely be nominated as such when the Academy Awards come out later on. Ben Affleck directs and stars as real life CIA operative, Tony Mendez who led one of the great escapes in history getting six Americans out of Tehran during the hostage crisis. The six were originally in the U.S. embassy but escaped out a … END_OF_DOCUMENT_TOKEN_TO_BE_REPLACED