You are here: Home / Archives for Baylor 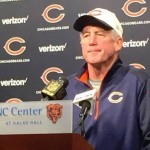 on the Weekend Sports Report with Packer Dave and Steve Leventhal ...our guest Chris Boden on ComcastSportsChicago joins us to preview the Bears-Rams game as well as get his take on Chicago's 2015 season to date. Jeff Rich chimes in on on the 2015 Packers-Lions, as well as the big games in the rest of the NFL, plus a discussion of the current college football playoff … END_OF_DOCUMENT_TOKEN_TO_BE_REPLACED