You are here: Home / Archives for BCS Championship game 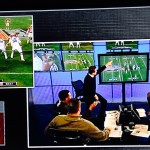 The final BCS Championship game was a game for the ages. Fans who were thrilled and delighted with the down to wire contest won by Florida State 34-31, not just for the action on the field, but for the myriad of viewing choices they had to watch the college title game with their "Megacast." ESPN offered several different telecasts, as well as web based cameras focused on the … END_OF_DOCUMENT_TOKEN_TO_BE_REPLACED