You are here: Home / Archives for Brownsville Station 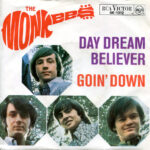 1965, The Kinks, The Who, Manfred Man, The Hollies and Gerry and the Pacemakers all appeared on the TV pop show Shindig! 1966, Pink Floyd and Soft Machine played at the UFO presents Night Tripper at the Blarney Club, London, England. 1967, John Lee Hooker performed at the Grande Ballroom in Detroit, Michigan. 1967, The Beatles scored their 15th number one with "Hello … END_OF_DOCUMENT_TOKEN_TO_BE_REPLACED

1964, The Beatles appeared live on the ABC Television program Lucky Stars (Summer Spin,) performing "A Hard Day's Night," "Long Tall Sally," "Things We Said Today," and "You Can't Do That." To avoid the crowd of fans waiting for them, The Beatles arrived at the Teddington Studio Centre by boat, traveling down the River Thames. 1965, The Who performed two shows on this … END_OF_DOCUMENT_TOKEN_TO_BE_REPLACED

This time on The Award Winning 3D RadioActivity, we are playing one-hit wonders, which is a person or act known mainly for only a single success. The term is most often used to describe music performers with only one hit single.  Some are the result of novelty songs during fads.  More commonly, however, these are serious-minded musicians who struggled to continue their success … END_OF_DOCUMENT_TOKEN_TO_BE_REPLACED