The term "boy" is primarily used to indicate biological sex distinctions, cultural gender roles or both. The latter most commonly applies to adult men, either considered in some way immature or inferior, in a position associated with aspects of boyhood, or even without such connotations as the age indiscriminate synonym. The term can be joined with a variety of other words to … END_OF_DOCUMENT_TOKEN_TO_BE_REPLACED 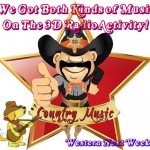 I'm Uncle Marty, and and on this episode of The Award Winning 3D RadioActivity, we are going back to the country.  What can I say about Country Music that hasn't been said?  Music inspired by am imagined jam session between bluegrass legend Bill Monroe and jazz legend Charlie Parker.  Songs from 1001 album you must hear before you die, because sometimes death and country music … END_OF_DOCUMENT_TOKEN_TO_BE_REPLACED