You are here: Home / Archives for Chicago Cubs

with Packer Dave, Steve Leventhal, and John Poulter The guys are back to discuss the Toronto Raptors' first ever NBA Championship, the St. Louis Blues and their seven-game Stanley Cup win over Boston, as well as talk of the Chicago Bears and Green Bay Packers offseason football. John also gives his thoughts on the Major League Baseball season. Lastly, Jeff Rich joins us to … END_OF_DOCUMENT_TOKEN_TO_BE_REPLACED

with Packer Dave and Steve Leventhal Joining us this month are Dionne Miller of ABC7 Chicago, just back from Arizona, to talk Spring Training and a some Bears football. Jeff Rich chimes in on NBA hoops, and Adam Lucas, UNC beat writer from GoHeels.com previews the Duke-Carolina game and the ACC Tournament for us. Don't miss cameos from Pat Hughes and Bill Raftery. … END_OF_DOCUMENT_TOKEN_TO_BE_REPLACED

with Packer Dave and Steve Leventhal Here's a little bonus Sports Report for you. Dave laments the end of the season for Packer fans, while discussing the playoff scenarios in the NFC and AFC. Steve reports from Halas Hall on the latest Chicago Bears news as the team begins to prepare for the final game of the season, and their first taste of post season in eight years. … END_OF_DOCUMENT_TOKEN_TO_BE_REPLACED 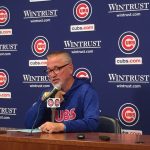 Pitching. Hitting. Defense. Baseball is a symphony. When the winds, the strings and the percussion sections of a symphony are harmonious, beautiful music results. But when thestrings are off, the whole performance is ruined The Cubs' symphony was almost perfect, but the silence of their bats cost them a rematch in the Divisional Round with the Milwaukee Brewers, as … END_OF_DOCUMENT_TOKEN_TO_BE_REPLACED