You are here: Home / Archives for Clash ~ The Magnificent Seven 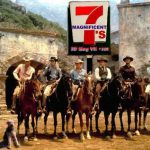 I'm your Uncle Marty, this is adventure # 369 of The 3D RadioActivity with my favorite prime number prominently on display as my six brothers, sisters, and I refer to each other as one of The Magnificent Seven.   Secret agent James Bond goes by that designation, while it's the number of Liberal Arts, count of heavens, seas, continents, hills of Rome; sages of Greece, wonders of … END_OF_DOCUMENT_TOKEN_TO_BE_REPLACED