You are here: Home / Archives for Dave Martinez 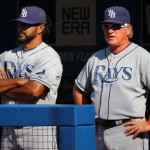 CHICAGO – The Chicago Cubs today named Dave Martinez as the club’s major league bench coach and shifted Brandon Hyde to first base coach.  Additionally, Henry Blanco has been named the club’s major league quality assurance coach.  Doug Dascenzo, who had been named first base coach on October 9, will remain in the organization as outfield and baserunning coordinator with … END_OF_DOCUMENT_TOKEN_TO_BE_REPLACED