You are here: Home / Archives for David Axelrod 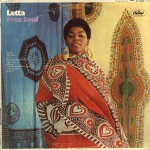 So, while listening to a compilation of David Axelrod’s 1960s productions, my ears perked up when I heard the sound of Letta Mbulu’s voice. At once, I knew I needed to hear more and learn more about whom this afro-pop princess is, and discover as much of her music as possible.

But first, I’ll digress…David Axelrod is a composer and producer, best known for working with Lou Rawls and Cannonball Adderly in the 1960s while employed by Capitol Records. Letta Mbulu was introduced to him by Cannonball Adderly, who had seen her perform at The Village Gate in New York City, but I’m getting ahead of myself.

Hailing from Soweto, Mbulu was forced out of her country in 1965 due the Apartheid and came to the United States. In her native country, she gained notoriety by performing in the popular musical, King Kong, for several years. Settling in New York City, she was welcomed by fellow King Kong cast members Miriam Makeba and Hugh Masakela, who began to help her get established in her new country.

After touring with Cannonball Adderly, Axelrod signed her to Capitol Records, where she recorded her first album “Letta Mbulu Sings” in 1967. While the album didn’t get much traction in this country, she was afforded an opportunity to record a follow up, the afro-pop classic Free Soul in 1968, where today’s Song Of The Day is from. It was around this time the decision was made for her to drop her last name on records, in the hopes she might be able to gain more airplay.

Following her stint with Capitol, Mbulu recorded several records for the Chisa label in the early 1970s. After Chisa folded, she followed Cannonball Adderly to the Fantasy label where she released the album Naturally in 1973. From there, Hugh Masakela brought her to the attention of Herb Alpert, who signed her to his A&M label where she released several albums, including a high profile appearance on Quincy Jones’ soundtrack to Roots.

She returned back to Africa in 1991 after 26 years with her husband, Caiphus Semenya, where she continues to record and performs today. Mbulu is also the singer who provided the Swahili chant on Michael Jackson’s single, “Liberian Girl.” 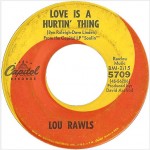 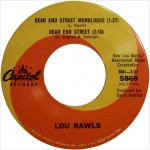 Chicago-born Rawls got his start by replacing Sam Cooke in the Gospel group, The Highway QC’s. After a stint in the Army, Rawls joined another Gospel group called Pilgrim Travelers. While on the road with Sam Cooke and The Travelers, Rawls was in a serious car accident that left him pronounced dead at the scene of the accident. He was revived but was in a coma for five days before regaining consciousness. After he recuperated, Rawls began doing session work, most notably singing background vocals on Sam Cooke’s “Bring It On Home To Me.”

He was signed to Capitol Records by staff producer Nick Venet (The Beach Boys, The Kingston Trio, Nat King Cole, Glen Campbell) and recorded his first album, Stormy Monday, for the label in 1962 backed by the Les McCann Trio. The Les McCann Trio was a stalwart of the Sunset Strip jazz clubs and was also signed by Nick Venet to Pacific Jazz Records. Their lineup included McCann on piano, Leroy Vinnegar on bass and Ron Jefferson on drums. Rawls’ early albums featured a mix of jazz and blues standards, but it wasn’t until Rawls cut a proper soul album in 1966 that his star began to rise in the industry.

That album was called Soulin’ and it featured the top side of today’s double-sided reissue jukebox single, Rawls’ first top forty hit “Love Is A Hurtin’ Thing,” which climbed to #13 on the pop charts, while topping the R&B charts in 1966. The song was written by Ben Raleigh and Dave Linden, and covered by several artists including The Temptations and Big Maybelle.

The flip of today’s single was one of Rawls’ patented soul monologue hits called “Dead End Street” which painted a bleak picture of Chicago ghetto life circa 1967. The song was originally on Rawls’ David Axelrod-produced 1967 album called Too Much.

The monologue or spoken recitation hit was not a new idea when Rawls brought it to the soul charts. Country artists had been doing spoken word records for years, whether by Hank Williams under the guise of Luke The Drifter, or songs like T. Texas Tyler’s “Deck Of Cards,” Jimmy Dean’s “Big Bad John,” Red Sovine’s “Phantom 49” and later on with songs like Johnny Cash’s “A Boy Named Sue,” Charlie Daniels Band’s “Uneasy Rider” and C.W. McCall’s “Convoy.”

The difference between these songs and Rawls’ take on the spoken hit is far more organic since Rawls’ recordings began as unprepared monologues that sprang up during concert recordings or recording sessions that in essence worked to set the songs up before launching into them properly.

Rawls: “I was working in little joints where the stage would be behind the bar. So you were standing right over the cash register and the crushed ice machine. You’d be swinging and the waitress would yell, ‘I want 12 beers and four martinis!’ And then the dude would put the ice in the crusher. There had to be a way to get the attention of the people. So instead of just starting in singing, I would just start in talking the song.” (http://www.lourawls.com/rawlsbio.html)

Rawls’ “Dead End Street” climbed to the #3 Position on the R&B charts (and #29 pop) and won him a Grammy for Best R&B Vocal Performance in 1967. While the single was on the charts, Rawls performed at The Monterey Pop festival alongside such luminaries as Otis Redding, Jimi Hendrix, Simon & Garfunkel, The Grateful Dead and Jimi Hendrix.

He continued to record for Capitol scoring hits like “Tobacco Road” and “Your Good Thing (Is About To End),” plus many others. He also opened for The Beatles on their 1966 tour in Cincinnati. In total, Rawls recorded over twenty albums for the label before signing with MGM in 1970.

2020 and 2019: Thanks to everyone who continues to support us. The current licensing to legally play all the music you hear on Acid Flashback costs almost $2000 a year. Please help us defray this and other costs with a donation of any amount. … END_OF_DOCUMENT_TOKEN_TO_BE_REPLACED