You are here: Home / Archives for DeSean Jackson 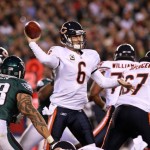 Just a few short weeks ago, the Chicago Bears' playoff hopes seemed to be over after two straight losses to the Rams and the Vikings. To make matters worse, the Bears were playing without starting quarterback Jay Cutler and starting linebacker Lance Briggs. Fast forward to week 16, the Bears now find themselves atop the NFC North and in control of their own playoff destiny … END_OF_DOCUMENT_TOKEN_TO_BE_REPLACED