You are here: Home / Archives for Film Soundtrack

Disney lyricist Robert Sherman has died at the age of 86. Robert Sherman and his brother Richard wrote the songs for such Disney classics as "Winnie The Pooh," "Mary Poppins," "Chitty Chitty Bang Bang," "The Aristocats," "The Parent Trap," "Bedknobs and Broomsticks" and the Disney theme park theme "It's A Small World." The duo also wrote the hits "Tall Paul" by Annette … END_OF_DOCUMENT_TOKEN_TO_BE_REPLACED 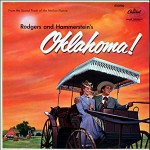 The Broadway version of “Oklahoma!” opened in 1943 and ran 2, 212 performances. With music by Richard Rodgers and Lyrics by Oscar Hammerstein III, the Pulitzer Prize-winning score gave us the standards “Oh What A Beautiful Mornin’,” “People Will Say We’re In Love,” “(Everything’s Up To Date In) Kansas City,” “The Surrey With The Fringe On Top,” “The Farmer And The Cowman” and … END_OF_DOCUMENT_TOKEN_TO_BE_REPLACED

A funny thing happened to the Broadway Musical Cabaret during its adaptation to the big screen. It lost ten out of its original fifteen songs. Many of the original Broadway songs were in the play to express the emotions of the characters and move the plot line forward, something that the medium of film was able to accomplish by using visuals. As a result, Bob Fosse only … END_OF_DOCUMENT_TOKEN_TO_BE_REPLACED

Halloween is in the air…and so is the greatest Halloween and Christmas film ever made! Tim Burton’s “Nightmare Before Christmas” has become a modern-day classic. The film had a ten-year gestation period and was released in October of 1993. The soundtrack was composed and mostly performed by Danny Elfman, who was a member of the new wave band Oingo Boingo from 1976-1995. The … END_OF_DOCUMENT_TOKEN_TO_BE_REPLACED