You are here: Home / Archives for Gene Vincent 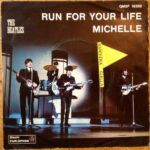 1965, The Beatles recorded "Run For Your Life" in its entirety, in five takes for their upcoming album Rubber Soul at Abbey Road Studio’s London. John Lennon later admits to lifting two lines from Elvis Presley's 1955 hit "Baby Let's Play House." The group also works on another new Lennon song "This Bird Has Flown," later known as "Norwegian Wood (This Bird Has Flown.") The … END_OF_DOCUMENT_TOKEN_TO_BE_REPLACED