on The Sports Report with Packer Dave, Steve Leventhal, Jeff Rich, and John Poulter Joined by special guest Mark Grote, the newest member of the Chicago Bears radio broadcast team. He talks about his role as the sideline reporter. In addition, he helps us analyze the selection of Georgia LB Roquan Smith with the eight overall pick in the 2018 NFL Draft. Dave, Steve, and … END_OF_DOCUMENT_TOKEN_TO_BE_REPLACED

on The Sports Report with Packer Dave, Steve Leventhal, John Poulter, and Jeff Rich Rory Spears of GolfersOnGolf.com joins us with his thoughts on the upcoming 2018 Masters.  Will Tiger have an impact? What role with the big three, Dustin Johnson, Justin Thomas, and Jordan Speith play? Who might emerge as a surprise winner? Phil Mickelson is playing his best golf in years.  … END_OF_DOCUMENT_TOKEN_TO_BE_REPLACED

on the Sports Report with Packer Dave, Steve Leventhal, Jeff Rich, and John Poulter Get your 2018 NFL Divisional Playoff Preview with Dave and Jeff. Steve and Dave look at the front office changes in Green Bay and Chicago, along with our special guest Les Grobstein of the Score 670 radio.  John updates us on the Blackhawks, Maple Leafs and the rest of the NHL. Plus, some … END_OF_DOCUMENT_TOKEN_TO_BE_REPLACED 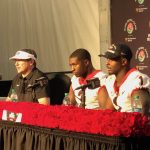 on The Sports Report with Packer Dave, Steve Leventhal, and Jeff Rich It's also the start of the NFL playoffs, so our guest Scott Harrison, who covers the Saints regularly, previews the New Orleans - Carolina Panthers game for us.  We'll look at the other matchups this weekend, as well as give you a preview of the 2018 college football championship game between Georgia and … END_OF_DOCUMENT_TOKEN_TO_BE_REPLACED 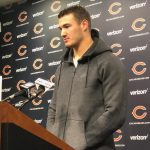 with Packer Dave, Steve Leventhal, and John Poulter This week we'll look at the upcoming key games in the NFL, preview the Bears-Browns and Packers- Vikings game. Sportswriter Jay Paris, author of “Game of My Life Rams: Memorable Stories of Rams Football,” gives us his take on the 2017 Rams team. Lastly John Poulter talks NHL hockey, plus he and Steve discuss the busy week in … END_OF_DOCUMENT_TOKEN_TO_BE_REPLACED