You are here: Home / Archives for Jeanne And The Darlings ~ What Will Later On Be Like

Jeanne And The Darlings ~ What Will Later On Be Like 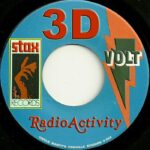 I'm your Uncle Marty, this is The 3D RadioActivity's episode #558, as our STAX retrospective focus will be all singles from their VOLT division. In that era, many radio stations, anxious to avoid even the hint of payola, often refused to play more than one or two new cuts from any single record company at one time, so as to not appear to be offering favoritism to any particular … END_OF_DOCUMENT_TOKEN_TO_BE_REPLACED