You are here: Home / Archives for Jennifer Warnes ~ Up Where We Belong

Jennifer Warnes ~ Up Where We Belong 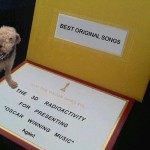 Once again, The 3D RadioActivity is playing the best in music that got it's fame from accompanying visual efforts on the big screen.  The Academy Awards are an annual American ceremony honoring recognition of achievements in the film industry worldwide.  Winners receive the statuette better known by his nickname Oscar, although his official title is the Academy Award of Merit.  … END_OF_DOCUMENT_TOKEN_TO_BE_REPLACED