You are here: Home / Archives for Journey 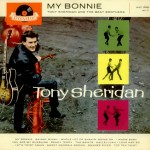 1961, Two days after Beatles fan Raymond Jones asked for The Beatles' German single "My Bonnie" (recorded with Tony Sheridan) at Brian Epstein's NEMS record store in Liverpool, two girls asked for the same record. Epstein's difficulty in locating the record was due to him not knowing that the record was released, not by The Beatles, but by Tony Sheridan and "The Beat Brothers" … END_OF_DOCUMENT_TOKEN_TO_BE_REPLACED

1966, The Who arrive at a TV studio in Stockholm to appear on the Popside program for Sverige Television. Coming onstage busting through a Union Jack paper hoop, they mime performances of "Daddy Rolling Stone," "It's Not True," "Bald Headed Woman," "The Kids Are Alright," "Substitute," and "My Generation" while standing on a ramp. The show is directed by Peter Goldmann, later … END_OF_DOCUMENT_TOKEN_TO_BE_REPLACED

1963, The album The Freewheelin’ Bob Dylan was released by Columbia in the USA. Establishing Dylan as a leader in the singer-songwriter genre and a supposed spokesman for the youth-orientated protest movement, it reached number 22 on the US charts and number one on the UK charts. The Freewheelin’ Bob Dylan showcased Dylan's songwriting talent for the first time and propelled … END_OF_DOCUMENT_TOKEN_TO_BE_REPLACED

This week on  The Award Winning 3D RadioActivity, and on this episode we are celebrating triple gold, Our 150th Show and in tribute to The London Olympics, Seanimal and I are playing songs about Sports!  Music and sports are so intertwined it's hard to imagine one without the other. The action on the field has a built-in sound track—a perfect score. The ancient Greeks … END_OF_DOCUMENT_TOKEN_TO_BE_REPLACED