You are here: Home / Archives for Kevin Garnett 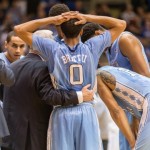 The Weekend Sports Report with Packer Dave and Steve Leventhal SRN's own Phil Meyers joins us to talk about another amazing contest in the Carolina - Duke rivalry, Wednesday night the 92-90 OT thriller at Cameron Indoor Stadium. Plus, Ryan Horvat, also from SRN analyzes the NBA trade deadline deals, while Dave and Steve discuss news from around the NFL. Hear interviews from … END_OF_DOCUMENT_TOKEN_TO_BE_REPLACED 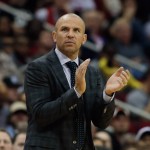 Heading into the season, both the Nets and Knicks were projected to be legitimate contenders in the Eastern Conference. The Nets assembled a starting lineup of veteran all-stars (at a price tag of $82.4 million) to make a run at a championship. The Knicks set out to improve on last year's 54-win season by adding Andrea Bargnani and Metta World Peace. Yet, through a combined 34 … END_OF_DOCUMENT_TOKEN_TO_BE_REPLACED