You are here: Home / Archives for Lilly Allen 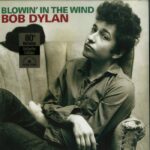 1962, Bob Dylan recorded "Blowin' In the Wind" at Columbia Recording Studios in New York City during an afternoon session. Dylan originally wrote and performed a two-verse version of the song, as in its first public performance, at Gerde's Folk City on April 16th, 1962. 1965, Otis Redding began recording sessions at Stax Studios in Memphis, Tennessee for what would become … END_OF_DOCUMENT_TOKEN_TO_BE_REPLACED