You are here: Home / Archives for Mooth The Hoople 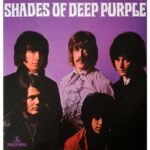 1968, Deep Purple made their live debut at a gig in Tastrup, Denmark. Formally known as Roundabout, guitarist Ritchie Blackmore suggested a new name, Deep Purple,  after his grandmother's favorite song. "Deep Purple" had been a hit for Peter De Rose. Blackmore's grandmother had repeatedly asked if they would be performing the song. 1968, Apple Music ran advertisements … END_OF_DOCUMENT_TOKEN_TO_BE_REPLACED