The Northwestern Wildcats, despite sitting key contributors for much of the second half, got a victory over in-state rival Illinois. The Cats now turn their attention to Indianapolis, where they will face Ohio State for the Big Ten Championship. Illinois came to Evanston with nothing more than pride on the line. Their 4-7 record entering Saturday night's game guaranteed … END_OF_DOCUMENT_TOKEN_TO_BE_REPLACED 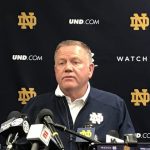 The gold helmets that are the calling card of Notre Dame football were held high in triumph as the Fighting Irish trotted off Ryan Field in celebration of their 31-21 victory over the Northwestern Wildcats. The classic gold matched up with Northwestern's throwback numbered helmets was emblematic of the first-half: Tough, grind-away offense that resulted in low-scoring. Each … END_OF_DOCUMENT_TOKEN_TO_BE_REPLACED 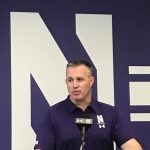 The Northwestern Wildcats seemed down and out Saturday against the Nebraska Cornhuskers. Faced with the daunting task of a 99-yard touchdown drive with two minutes remaining in the fourth quarter, it seemed the Wildcats were going to fall short yet again at home. Against all odds, quarterback Clayton Thorson led his team on that march. He kept his offense on schedule and … END_OF_DOCUMENT_TOKEN_TO_BE_REPLACED

Football is an ecosystem. There are the hunters and there are the hunted. In college football, some schools are the hunters while everyone else is... well, you know the rest. The 1-2 Northwestern Wildcats had a chance to disrupt that ecosystem Saturday night against the number 14-ranked Michigan Wolverines. But alas, the Big Ten's power balance remained un-teetered. Michigan … END_OF_DOCUMENT_TOKEN_TO_BE_REPLACED

The Northwestern Wildcats fell 39-34 to the visiting Akron Zips on Saturday, bringing them to 1-2 on the season and to a search for in-game consistency. Northwestern scored quickly off a botched Akron punt but otherwise came out of the gates struggling to get going offensively. The defense, however, played with tenacity and the discipline needed to contain Akron quarterback … END_OF_DOCUMENT_TOKEN_TO_BE_REPLACED