You are here: Home / Archives for Patrick Sharp 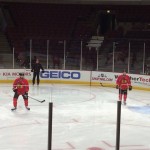 It has been an interesting week to say the least for the Chicago Blackhawks. The team returned from their circus road trip on Wednesday night with a 4-1 victory over the St Louis Blues at the United Center. They also found out this week, they will be without goaltender Corey Crawford for 2-3 weeks. Crawford will miss time, while he recovers from a foot injury he suffered by … END_OF_DOCUMENT_TOKEN_TO_BE_REPLACED

The Chicago Blackhawks have activated forwards Jonathan Toews and Patrick Sharp from Injured Reserve. Toews, 23, shares second in the NHL with 27 goals, and ranks second on the Blackhawks with 50 points (27G, 23A) in 49 games this season. The Winnipeg, Manitoba, native was honored as a National League All-Star this year for the third time in his career, and paces the NHL in … END_OF_DOCUMENT_TOKEN_TO_BE_REPLACED