You are here: Home / Archives for Pete Seeger & Tony Trischka ~ There’s A Feeling In Music 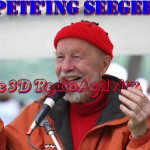 This time on The 3D RadioActivity, we are paying a tribute to Pete Seeger, a member of what is termed the greatest generation, one of the people who lived through the great depression of the 1920's, went to battle in World War Two and then came home to build America to the standards which we are accustomed to in the 21st century.   We will remember with his ballads played by … END_OF_DOCUMENT_TOKEN_TO_BE_REPLACED