You are here: Home / Archives for prog rock

Two shows, two nights, and they could have been more different. Three Dog Night at the Genesee Theatre was a memorable greatest hits show, while Steve Hackett and his 2019 Genesis Revisited tour was a journey into the wonderful depths of the prog rock stratosphere.

You wouldn’t know most of the songs played unless you listened to a lot of FM radio in the early and mid-1970’s. However, this audience sure did.

The show began with “Every Day,” the opening track from Hackett’s 1979 album “Spectral Mornings” as he was celebrating the 40th anniversary of its release. “The Virgin and the Gypsy”, “The Red Flower of Tachai Blooms Everywhere” and the title track all made it into the set list, along with compositions from his most recent album, At The Edge of Light.

The second set was where the payoff was when the band performed Genesis’ Selling England By The Pound. The ensemble included Hackett on guitar, Nad Sylvan on vocals, Roger King on keyboards, Craig Blundell on a huge drum kit, Jonas Reingold on bass, 12-string and bass pedals, and Rob Townsend on saxophone, flute, brass, woodwind, keyboards and percussion. All the performers were terrific, but kudos to Sylvan for his spot on renditions of the Peter Gabriel vocal work. Unfortunately, a few times when the music hit a loud crescendo, it was hard to hear his voice, but in the quiet parts he really shined.

I have several special Genesis memories, but I would say that my happiest period in Genesis was during the recording and tour of Selling England by the Pound. By that time I was a fully fledged member of the band, I loved the music we were creating and we were playing to an increasing number of people. Although I was unhappy in my first marriage, I was in my element gigging with the band. The stage felt like my home at that time!

Hackett admitted that he hadn’t played the song “The Battle of Epping Forest” since the time of it’s release. ‘You know,” he told the appreciative audience, “I can’t just wake up at 3 AM and just play this stuff!”

The performance of SEBTP was spot on, while the band added some blistering solos to “I Know What I Like (In Your Wardrobe)” that made that song the highlight of the second set. Just for good measure Hackett also played the song “Deja Vu” which he noted was left off the album, and “Dance on A Volcano” and “Los Endos” the opening and closing songs from Trick of the Tail, the first post Peter Gabriel Genesis album.

The crowd loved it. There were several standing ovations. Hackett even told the audience early on how they are what make the shows special. OK…this is a little embarrassing now, but back in 1974 when this record came out, I spent a lot of time spinning this one. Between this, David Bowie’s “Diamond Dogs,” Lou Reed’s “Rock ‘n’ Roll Animal,” Elton John’s “Caribou,” Todd Rundgren’s “Utopia,” Frank Zappa’s “Apostrophe” and Yes’ “Relayer” I thought I had it made…and I did. Most of the aforementioned albums hold up pretty well today…unfortunately, Wakeman’s didn’t… 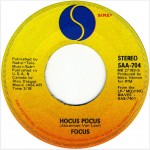 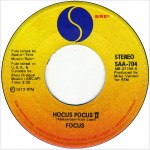 Ingredients for a hit record:

Ok, so it was an unlikely hit that emanated from an unlikely place by an unlikely group.  But if you were tuned in to the radio back in 1972/1973 and you heard this track pouring forth from the speakers on your stereo, you couldn’t help but take notice.

Focus were a Dutch progressive rock band featuring the guitar frenzy of Jan Akkerman, the flute and keyboard dynamics of Thijs van Leer, the bottomed out bass of Cyril Havermans and the percussive attack of Pierre van der Linden. The group formed in 1969 but didn’t break big in America until 1972 with the release of today’s jukebox classic “Hocus Pocus” as a single.

“Hocus Pocus” is a track that predicted the loud-soft dynamic of grunge, alternating between the ultra-loud crunchy guitar riff of the chorus and the verses that included all of the quirky elements listed above. It made for an interesting spin and certainly one of the most original singles to ever grace the pop charts.

The album version of the song was close to seven minutes long so it was edited and sped up for its single release which climbed to the #9 position on the US charts in 1973. In England, the single was backed with another track called “Janis” from their second album Focus II (known in America under the title Moving Waves).  However, in America the record was backed with a second sped up edit of “Hocus Pocus” created from the album master.

This unlikely hit was covered by Iron Maiden, Helloween, guitarist Gary Hoey and Marillion, and has been performed in concert by the likes of Foo Fighters and They Might Be Giants.

During the 1970s, Focus released several albums including Hamburger Concerto, Moving Waves, Focus 3 and Live At The Rainbow that became staples of progressive FM radio playlists; however the band never really reached the upper echelons of the charts in this country again. In the UK, the single “Sylvia” from Focus 3 climbed to #4 on the charts making it their biggest hit in that territory.

Click on the far right button to listen in popup window and keep surfing on InternetFM.com

as well as iTunes Radio  – under “Classic Rock.”

Our focus is on mixing popular songs with live versions, outtakes, deep cuts, bootlegs, and covers to bring the listener back to the days of album rock and free form radio.

For those who grew up with stations like WBCN, WNEW, WMMR, WMMS, or KSAN, you will love Acid Flashback.

2020 and 2019: Thanks to everyone who continues to support us. The current licensing to legally play all the music you hear on Acid Flashback costs almost $2000 a year. Please help us defray this and other costs with a donation of any amount. … END_OF_DOCUMENT_TOKEN_TO_BE_REPLACED