You are here: Home / Archives for Russell Wilson

with Dave Rusch and Steve Leventhal ....Steve can only sit by helplessly as Packer Dave uses the radio show to crawl out of that deep dark pit of despair, by ranting and raving, following the Packer loss to Seattle in the NFC Championship game.  Not withstanding the fact that every other radio, television, and newspaper scribe has already weighed in on this subject.  It's the … END_OF_DOCUMENT_TOKEN_TO_BE_REPLACED 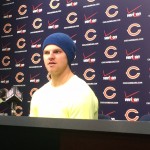 with Dave Rusch and Steve Leventhal ..join us with our guest Les Grobstein from the Score 670 in Chicago, as we look at the Bears quarterback mess.  Highly paid Jay Cutler is being benched to give journeyman Jimmy Clausen a chance to start against Detroit on Sunday.  Everything that can go wrong for the Monsters of the Midway has gone wrong in 2014. Will it cost Marc Trestman … END_OF_DOCUMENT_TOKEN_TO_BE_REPLACED