You are here: Home / Archives for Santana

1966, Pink Floyd make their first ever appearance at the Royal Albert Hall. Their would play the RAH three more times, with the last performance there in 1970. 1966, Jimi Hendrix performs at the RamJam Club in London. 1967, Rolling Stone Brian Jones was given 3 years probation and a £1,000 ($1,600) fine for drug offenses. Three psychiatrists agreed that Jones was an … END_OF_DOCUMENT_TOKEN_TO_BE_REPLACED 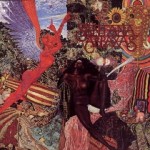 1965, The Beatles played their last ever show in their hometown of Liverpool when they appeared at The Liverpool Empire during the group's final UK tour. Only 5,100 tickets were available, but there were 40,000 applications for tickets. 1965, The Rolling Stones played two shows at the Convention Hall in San Diego, California on the last night of a 37-date North American … END_OF_DOCUMENT_TOKEN_TO_BE_REPLACED

1964, Decca Records released The Rolling Stones’ "Little Red Rooster." Written by Willie Dixon, as "The Red Rooster," and previously recorded by Howlin’ Wolf and Sam Cooke, the single was recorded at Chess Studios in Chicago. It was a number one hit in the UK and remains the only time a blues song has ever topped the UK pop chart. 1965, The Castiles, which featured a young … END_OF_DOCUMENT_TOKEN_TO_BE_REPLACED

1964, Bob Dylan performs a Halloween concert at New York's Philharmonic Hall. CBS is recording the show for a possible live album. Dylan shows off a new composition called "Advice to Geraldine on Her Miscellaneous Birthday." 1964, Ray Charles was arrested by Logan Airport customs officials in Boston and charged with possession of heroin. This was his third drug charge, … END_OF_DOCUMENT_TOKEN_TO_BE_REPLACED

1968,  The Beatles recorded 20 takes of "Birthday" while working at Abbey Road studios on new songs for their forthcoming White Album Roadie Mal Evans added handclaps, and Yoko Ono and Pattie Harrison contributed backing vocals on the track. 1968,  The Doors film a six-song set for Danish Radio Television  at TV-Byen in Gladsaxe, near Copenhagen, Denmark. The program is … END_OF_DOCUMENT_TOKEN_TO_BE_REPLACED