You are here: Home / Archives for Satus Quo 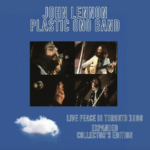 1969, John Lennon married Yoko Ono at the British Consulate Office in Gibraltar. They spent their honeymoon in Amsterdam campaigning for an international "Bed-In" for peace. They planned another "Bed-in" in the United States, but were denied entry. The couple then went to Montréal, and during a "Bed-in" at the Queen Elizabeth Hotel recorded ‘Give Peace a Chance’. Lennon also … END_OF_DOCUMENT_TOKEN_TO_BE_REPLACED