You are here: Home / Archives for Shea McClellin 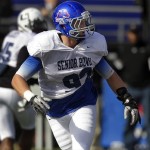 (LAKE FOREST, IL) The Bears held pat, eschewing trade offers both upwards and downwards and selected Shea McClellin, a DE/OLB from Boise State with the 19th pick in the 2012 NFL draft. Apparently he was a bit of a late bloomer in the draft. It came as a bit of a surprise to the media assembled at Halas Hall to cover the proceedings. The Bears media info touts the … END_OF_DOCUMENT_TOKEN_TO_BE_REPLACED