You are here: Home / Archives for Terry jacks 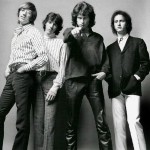 1967, The Doors and The Jefferson Airplane appeared at Cheetah, Santa Monica Pier, Venice, California. This was the largest show The Doors had played to date with a crowd of over 3,000. 1967, The Who appeared at Thalia Theater, Wuppertal, Germany. 1968, Jimi Hendrix and B. B. King performed at the Generation Club, New York. 1969, Yes played at the Marquee Club, … END_OF_DOCUMENT_TOKEN_TO_BE_REPLACED