You are here: Home / Archives for The Beatles – Hey Jude

There have been 178 recipients during the Kennedy Center Honor's first 34 years. This time on The 3D RadioActivity, we are playing the original songs from the performers that were covered by other artists in this yearly tribute. They have been presented annually since 1978 in Washington, D.C., during a weekend-long party that culminates in a performance to recognize this … END_OF_DOCUMENT_TOKEN_TO_BE_REPLACED 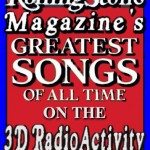 I'm Uncle Marty, this is your Award Winning 3D RadioActivity, and on this episode we are focusing on a group of recordings, specifically the top rated ones from The Rolling Stone Magazine, a recognized authority in the Rock & Roll Music Industry. You have heard me reference them on the show nearly every week. Well this time, the music is from their top 500 songs of all time … END_OF_DOCUMENT_TOKEN_TO_BE_REPLACED